The well renowned Varadaraja Perumal Temple which is otherwise called as Hastagiri or Attiyuran is considered to be one among the temple of 108 Divya Desams dedicated to Lord Vishnu is located in the holy city of Kanchipuram. It is believed that Alwars(Vaishanava Saints) have sung hymns on the glory of the Lord of the Temple.
The Temple tank- Anantha Saras which is located on the northside of 100 pillar hall consists of two Mandapams. 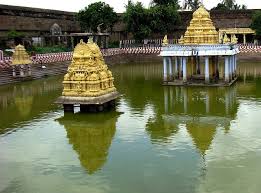 The idol of Lord Athivaradharajar in reclining posture,made of Athi(Fig) Wood is preserved inside a Silver casket and immersed beneath the water on the south side Manadapam of the Ananthasaras Pond. 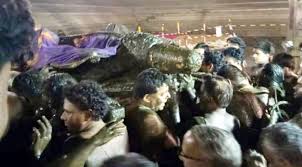 This Picture was taken this year when Athivaradhar taken from Ananthasaras

When to visit –
The majestic event, Raising of Lord Athi Varadar starts from 1st July to 17th August 2019. The Idol is taken out from the temple tank on 1st July and placed outside for public worship in Vasantha Mandapam for a period of 48 days. It is said that devotees can worship the lord in both reclining posture for 24 days and standing posture on remaining days. No Devotees will be allowed to see the upheaving process of Lord Athi Varadar from Temple tank.

Time to visit –
On the occasion of this event, it is expected that lakh number of devotees would visit the temple. Hence the authorities have allocated a special darshan time to local people (Kanchipuram District) and outsiders.

Special Darshan Timings and Date for Devotees from Kanchipuram Taluk –
Devotees who hail from Kanchipuram Taluk can have special darshan of Lord Athi Varadar in Vasantha Mandapam from 5pm to 8Pm on below mentioned dates. People are requested to bring the Aadhar card for this evening darshan as they will be allowed only once if their Aadhar card has been scanned. Subsequently, if devotees are willing to worship the lord again, they can have darshan through General or Special Queue.

Modes of transportation –
Parking Location and Facilities:
Arrangements have been made for parking the private car and two-wheeler of pilgrims visiting the temple at pachaiyappan College (Nazarathpet), Tiruveedipallam, Lala Estate (City) and Olimugamathupet.

Railways –
Nearest railway station- Kanchipuram
In addition to this, pilgrims travelling from other parts of the state can make use of the following electric train schedules to reach kanchipuram.

Where to eat?
Only those who have obtained approval from district administration can distribute free food to pilgrims. Food samples will be tested by the respective authorities. Similarly, food security ocials have inspected about 300 restaurants in Kanchipuram and the foods from those restaurants will be tested daily.

Where to stay?
With respect to the occasion, Hotel booking is allowed only for 12 hours, rooms in most hotels are booked. Therefore, charitable organizations are making arrangements for wedding halls to accommodate the Pilgrims
from other states.

Public Toilets –
In Kanchipuram Municipality,70 Public toilets are already in use. Also, it has been planned to add an additional 11 to 22 temporary toilets in each of the 4 mada streets around the temple. Apart from this, arrangements are made to set up 36 toilets in the Little Kanchipuram and 92 toilets in the large Kanchipuram.

First Aid –
The health department has decided to set up 5 medical teams inside the temple and 4 medical teams outside the temple. Provision of temporary medical rooms with a 24-hour doctor facility and 108 ambulances insigniﬁcant areas has been arranged.

All these information collated and shared from Kanchipuram Collector Office